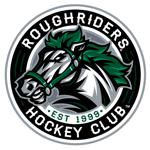 The RoughRider Hockey Club Cedar Rapids (RRHCCR) is pleased to offer the community a competitive youth Travel Hockey Program as well as a Learn to Play and House Program. In operation since 2002, the volunteer-run nonprofit association oversees teams on each level Mite through Bantam and collaborates with the High School and the USHL Teams. Our goal is to have a team for every player regardless of ability, and help nurture the development of players on through to their high school hockey careers where they may be selected to play for the RoughRiders high school team.

Through training offered by the RRHCCR and commitment by players themselves, travel hockey can shape young lives in positive ways through:

The RRHCCR ideally fields a minimum of 2 teams at each level of play. With tryout evaluation scores as a guide, teams are determined according to demonstrated skills and capabilities. It’s common to establish both “A” and “B” caliber teams, using the designation to make appropriate matches with opponents for both exhibition games and tournaments.

Mites play 20-minute games, half ice, 4 on 4 with goalies.  As the level with the youngest players, Mites typically play in 2 to 3 “jamboree” type events and 4 to 6 dates with a multitude of games played over the course of a few hours.

Team tryouts are typically held mid-August to September each year. The season opens on October 1 and closes mid-March. Each week teams will have one skills session and one to two team practices as well as dryland and/or stickhandling work. Game time and any travel is additional.

Parents of Jr. RoughRiders are also required to volunteer 20 hours of service time per year if they have one child in the program, and 25 hours for two+ children in the program. Ten of those hours should be volunteered at the player’s home tournament, if possible.

Each player’s family is expected to assist with fundraising.

The expenses associated with playing travel hockey will vary by player and team. Expenses generally include:

The RRHCCR offers fundraising opportunities and solicits corporate sponsorships to help defray association fees which are typically in the $800-$1,500 range depending on age. In some instances, scholarships may be awarded to players based on financial need.